General Leopoldo Galtieri’s military junta government declared “that 1982 would be ‘The Year of the Malvinas’” clarifying beyond a doubt the Argentine intention to settle the Falklands question.viii On 31 March 1982 intelligence was received “indicating that an Argentine Task Force” was heading towards the Falklands.ix

The Falkland Islands in addition to South Georgia, were invaded on the night of 1/2 April 1982.xi HMS Invincible was placed on alert on April 2.xii Argentine bank assets in Britain were frozen on April 3.xiii A rapid series of events followed, beginning with the establishment of the shipping Exclusion Zone on April 5. The “Zone”- termed as such to avoid the wartime connotations of “blockade” – was established for 200 miles around the islands.

During the Falklands War the Fleet Air Arm operated 20 FRS Harriers, squadrons aboard HMS Hermes and HMS Invincible.xvi RAF No. 1 Squadron GR3s also operated from Hermes.xvii In combat, 28 Harriers flew 2,197 sorties, resulting in 23 shoot-downs.xviii No 800 NAS and 899 (Hermes) flew 1,126 sorties and launched 14 AIM-9L sidewinders (only two of which missed their targets).xix No 801 and elements of 809 NAS were stationed aboard Invincible.xx

On 1 May 1982 seven aircraft were brought down by Sea Harriers for no losses.xxi The case of 1 May provides a startling example of the Harrier’s combat capability and the skill of the NAS and RAF operators. That afternoon, RAF Flight Lieutenant Paul Barton (801 Sqd.) and Lieutenant Commander John Eyton-Jones in two Harriers were on combat air patrol westward of the Task Force at 15,000 feet when HMS Invincible reported an enemy flight of six aircraft approaching, although this and another force aborted their attacks after firing several radar guided anti-air missiles and a resulting dog-fight.xxiii The flight was intercepted by a pair of Harriers flown by Lts Hale and Penfold. Penfold was able to attack and destroy Dagger C-433 with an AIM-9.xxiv

The major engagement of 1 May occurred when the FAA (Argentine Air Force) launched a coordinated attack with 20 aircraft. The first elements (a pair of Mirage IIIEAs from Grupo 8 flown by Captain Garcia Cuerva and Lieutenant Carlos Perona) were intercepted by Barton and wingman Lieutenant Steve Thomas (XZ452 and XZ453).xxvi xxvii Barton downed Perona (later recovered by the FAA) with an AIM 9, while Thomas chased Cuerva, damaging the latter’s aircraft with an AIM 9.xxviii Cuerva was unfortunately killed in a friendly fire incident as he returned to base.xxix The next day Thomas downed two Daggers, beginning the legend of the Harrier as Black Death: La Muerte Negra.xxx

The same day, 9 Harriers carrying thousand lb bombs attacked Stanley Airport in support of the ‘Black Buck’ Vulcan raids.xxxi Harriers from Hermes and Invincible were launched against Stanley Airport and dropped thousand lb and cluster bombs.xxxii Dave Stanley’s NAS 800 Harrier (ZA192) was hit by 20mm flak as he overflew the airport on 1 May.xxxiii Nigel “Sharkey” Ward, commander No. 801 NAS, has critiqued the Vulcan missions, each of which required 18 refuelling missions flown by 12 aircraft and 130,000 gallons of fuel “sufficient to fly 260 Sea Harrier missions… dropping 1,300 bombs.”xxxiv

The next day, 2 May 1982 HMS Conquerer torpedoed the ARA General Belgrano. On 4 May the FAA launched a pair of Super Etendards armed with 2 of Argentina’s 5 air capable Exocet missiles against the Task Force, resulting in the fatal strike against HMS Sheffield.xxxvi 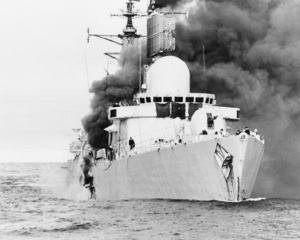 Retaliation attacks by Vulcan and Harrier aircraft was organized on 4 May. It was during this operation that Lt Nick Taylor, in XZ450 was hit and killed by AA. The attack was carried out by the remaining aircraft, ZA192 (cluster bombs) and XZ460 (1,000 lb bombs).xxxviii On 9 May, four Harriers, including XZ460 and ZA191 bombed and strafed the Argentine trawler Narwhal.xxxix On 10-11 May attacks were carried out by NAS 800 against the Stanley airfield: due to the Roland missiles defending the airport, bombs could only be dropped at 18,000 feet and were generally inaccurate.xl On 15 May the Argentine supply ship Rio Carcarana was spotted near Port King, and was attacked by Harriers XZ459 and XZ494, resulting in the ships abandonment.xli A similar fate met the Bahia Buen Suceso docked at Fox Bay and attacked by Harriers XZ500 and ZA191.xlii

On 18 May Atlantic Conveyer arrived carrying 4 FRS aircraft (No 809 NAS) and 4 GR.3s (No 1 RAF, of which two more aircraft arrived shortly afterwards).xliii 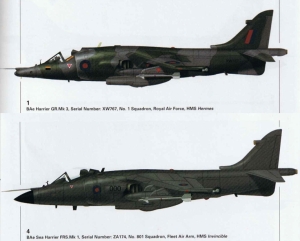 In a series of events known as “Bomb Alley” to the British, and “Death Valley” to the Argentines, the Ardent was sunk on May 21 by Skyhawks A-4Q0660 and A4Q0665 (A-4Q0660 was destroyed by XZ457’s AIM-9 launch and A-4Q0665’s pilot was forced to eject as a result of cannon hits).xlv Another Skyhawk in the area, A-4Q0667 was downed by cannon fire from Harrier XZ500.xlvi The sinking of the Ardent was a result of the Argentine attempt to disrupt Operation Sutton, the landing at Port San Carlos. During this operation, several waves of Dagger and Skyhawk aircraft attacked the Task Force. Patrolling Harriers XZ492 and XZ496 intercepted three Skyhawks and downed two of them. XZ455 and ZA176, launched in support, caught four incoming Daggers and destroyed C-409.xlvii

The Antelope was sunk on May 23, the same day Hermes CAP ZA192 and ZA191 intercepted a helicopter resupply force enroute from Port Stanley to Port Howard.xlviii The Coventry & Atlantic Conveyor were destroyed on May 25. The day before three Daggers were downed by Harriers XZ457 and ZA193.xlix Terrible losses were also inflicted upon the Royal Fleet Auxiliary vessels Sir Tristram and Sir Galahad on June 8 when they were attacked by eight Skyhawks and five Daggers.l Three Skyhawks were downed by AIM-9s and cannon by ZA177 and XZ499 in the evening of June 8.li

Lastly the Fearless was destroyed on June 8. Of these losses, the Sheffield and Atlantic Conveyor were destroyed by Exocets fired from FAA Super-Etendard 3-A-203.liii The loss of Atlantic Conveyor was particularly disastrous as not only had 10 Harriers been scrambled to intercept, but the Conveyor also carried the lion’s share of the Chinook helicopters required for the Commando heavy lift for land operations.liv The Argentines claimed to have scored an Exocet hit upon HMS Invincible, in addition to several bomb hits, on 30 May 1982, though Invincible sustained no damage that day.lv The majority of damage inflicted upon the Task Force was the result of A-4 Skyhawk attacks with conventional munitions. Skyhawk kills included the Ardent, Antelope and the Coventry. In total the 48 Skyhawks possessed by Argentina sank “a destroyer, two frigates and two landing ships” though at the steep and unacceptable price of 22 planes.lvi 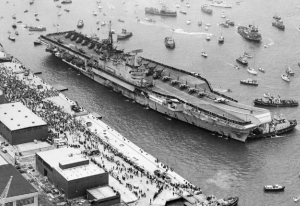 The campaign to liberate the islands was concluded by 14 June with the surrender of the Island’s garrison.lviii Two Harrier pilots were killed in combat operations. XZ450, 800 NAS stationed on HMS Hermes, pilot Lieutenant Nick Taylor, was shot down by 35mm gunfire 4 May 1982.lix Lt Cdr Batt was killed when ZA192 crashed on take-off in late May.lx

For their part, the FAA’s 14 Super Etendards sank two RN ships for no losses (Gunston, ed., The Encyclopedia of Modern Warplanes, p 106). The success of the carriers at the Falklands demonstrated the value of naval aviation for the Royal Navy: all the more significant considering the pre-Falkland RN cutbacks (Till, Seapower: A Guide for the Twenty-First Century, London: Frank Cass, 2004, p 194), p 273

lix James Spirit & Martin Paul, “One of Our Aircraft is Missing,” 27 Jan 2005 <http://www.britains-smallwars.com/Falklands/brit-aircraftlosses.htm>